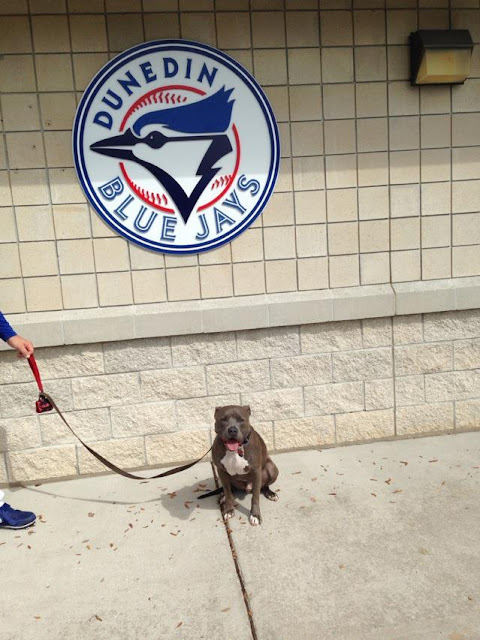 Slater, (Mark and Jamie Buehrle's dog) made his début at the Blue Jays Club House in Dunedin, Florida.

He apparently hit a home run! He was loved by all.. but this is no surprise. Slater is a valued member of the Buehrle family and they were forced to choose splitting their family between a house in the US and temp home in Toronto for Mark during the MLB season. Slater is part of an overwhelming high percentage of dogs which fall under the ban, a well trained, well socialized, highly valued member of the family. He has his Canine Good Neighbour certificate and is working on his Therapy Dog certification too!

The ludicrous "breed" ban in Ontario prevents Slater from entering the province. We had a Bill (Bill 16) to repeal the ban, which simply needed to be called for third reading. Bill 16 along with all other Bills on the table, died on the floor when McGuinty prorogued the House last year.

It is fully within Premier Kathleen Wynne's power to reconstitute Bill 16 as it was the day McGuinty prorogued. Tell the new Premier to put Bill 16 back on the Order Paper for Third Reading so that it can be voted on immediately.

Jurisdictions worldwide are repealing BSL like dominoes, replacing with fair and balanced laws that do not discriminate based on appearance or breed.

Come on Ontario, get your $hit together!

This is a do not miss interview. Thought provoking and informative. Please let your friends know to listen in as well.

Kim Wolfe from Maddie's Shelter Medicine Program discusses how the concept of breed in dogs ultimately does a disservice to animal welfare. Spectacularly prepared with articles, studies, statistics and her own research, Kim presents an excellent model to which we all should aspire. Kim's interview will  open your eyes to how deeply seated breed expectations can be, and what can be done to better conceptualize our mixed breed companion animals.

To listen to this interview with Kim click here.
at 3:17 PM No comments:

Mark and Jamie Beuhrle have decided that Jamie and family (including their family dog Slater, who is not welcome in Ontario, and 3 Vizsulas) will reside in St. Louis, while Mark lives in Toronto.

Mark was traded to the Toronto Blue Jays from Miami, where there is also a ban, but they were able to live outside Miami/Dade with only a short commute. The ban here is province wide, therefore the only options were New York state or Montreal. The commute would be considerable, therefore they made the decision that Mark would need to visit and commute to St Louis.

The ban on 3 of the rarest purebred breeds in Canada, the American Staffordshire Terrier, American Pit Bull Terrier and Staffordshire Bull Terrier, plus anything "ss" substantially similar? achieves nothing other than heartbreak and distress for good, ordinary citizens and families.

Any dog may be deemed a "pit bull" since in reality there is no way to prove a mix breed dog is A,B or C breed. It is a visual ID and no person, not dog judge, veterinarian, AC officer, nobody is qualified to identify the breed make up of a mix breed dog.

To read more on how this law breaks up families, check out this link. 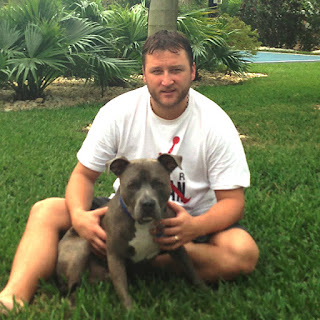 We support you Mark, Jamie and family. I wish we could welcome your whole family, Slater included to this province, but until this law is repealed...

Slater has been trained as a therapy dog. The insanity of this law runs deep.

Fair and Equal treatment under the law is our aim. Judging on behaviour not appearance is the only way to move forward.
at 1:06 PM 1 comment: