Rally for Hershey's Bill on the 5th Anniversary

Brendan KennedyStaff Reporter
Ontario’s controversial ban on pit bulls — now five years old — is under fire once again as a coalition of dog-loving groups rallied Sunday to support a local MPP’s efforts to have the law changed.
“They’re ripping family pets away from people based on very vague legislation,” said Rui Branco, who successfully fought the City of Brampton earlier this year by proving his family pet, Brittany, was not a pit bull.
The American bulldog-boxer mix was seized and held by the city for three months before an independent veterinarian was able to determine its breed.
“An animal control officer looked at her and said she was a pit bull. Then she was taken away from us.”
The law, as it stands, requires owners to prove their dogs are not pit bulls, which can be difficult if the dog was adopted from a shelter and its lineage is unknown.
A few hundred people and dozens of muzzled pit bull-type dogs gathered at Coronation Park on Lake Shore Blvd. W. Sunday afternoon to listen to speakers and to protest the current ban, which took effect in 2005 after a series of vicious attacks across Ontario involving pit bulls.
The Dog Owner’s Liability Act was amended to ban the breeding, sale and ownership of pit bulls. Dogs born before Nov. 26, 2005 are allowed to live, but must be sterilized, and muzzled and leashed in public. Dogs born later must be put down.
A pit bull is not a specific breed of dog, so the province’s definition of pit bulls includes pit bull terriers, Staffordshire bull terriers, American Staffordshire terriers, American pit bull terriers and any dog “that has an appearance and physical characteristics that are substantially similar” to those breeds.
Critics of the current law say its description of pit bulls is too vague, gives bylaw officers too much power and leads to harmless pets being removed from their homes at taxpayers’ expense.
They want the province to go after bad owners, rather than target any specific breed.
“You can’t tell a dog’s breed by how it looks,” said Kelly Turnbull, a member of Stop K9 Profiling, the group that organized Sunday’s event.
After a series of legal challenges, the group contacted the MPP for Parkdale-High Park, Cheri DiNovo, o owns an English bull terrier herself. Earlier this year DiNovo tabled a private member’s bill calling for the repeal of the breed-specific aspect of the Dog Owner’s Liability Act.
Named “Hershey’s Law” (for a pit bull that was barred from continuing its therapy work with seniors when the current law came into effect), Bill 60 received its first reading in the Legislature in May.
“This isn’t about the dog, it’s about the owner,” DiNovo said, adding the law has been ineffective in curbing the number of dog bites in the province.
She said she would like to see more responsibility and liability for dog owners, without targeting specific breeds.
“It doesn’t need the (breed specific legislation) to be effective.”
The Ministry of the Attorney General stands behind the current law, saying it ensures fewer opportunities for pit bull attacks and that the law has not been around long enough to accurately measure its effectiveness.
One of the most anticipated speakers of the day was Bill Bruce, director of Calgary’s Animal Control Services, heralded for its education, training and early intervention approach to animal control, which has drastically reduced the number of dog bites in the city.
“All dogs bite,” Bruce said. “I don’t care what kind of dog it is. If the dog is aggressive, it needs to be corrected.”
Sunday’s rally was followed by a pit-bull march along Queens Quay and a candlelight vigil at the Ontario Legislature to acknowledge all the pit bull-type dogs euthanized under the current legislation.
at 9:48 PM No comments:

At the August 29th event at Coronation Park in Toronto (see post below) the DLCC will not only have a booth but we are also conducting CGN testing from 12:00 noon to 4:30pm.


We will be running 2 rings simultaneously. The more dogs that get their certificate in CGN, the better! What an awesome documentation to have in hand. Let's show the government that we are responsible dog owners and our dogs are properly trained and socialized.


Dogs must be 6 months old to get a certificate.


If you are interested in booking a time slot please email me
dlccevents(at)gmail.com


Here is the criteria for the testing; 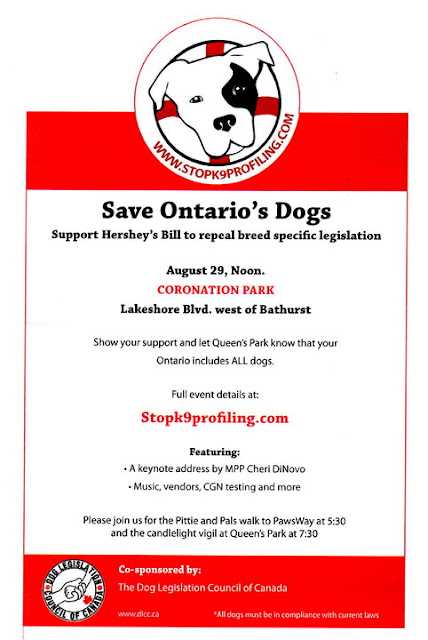 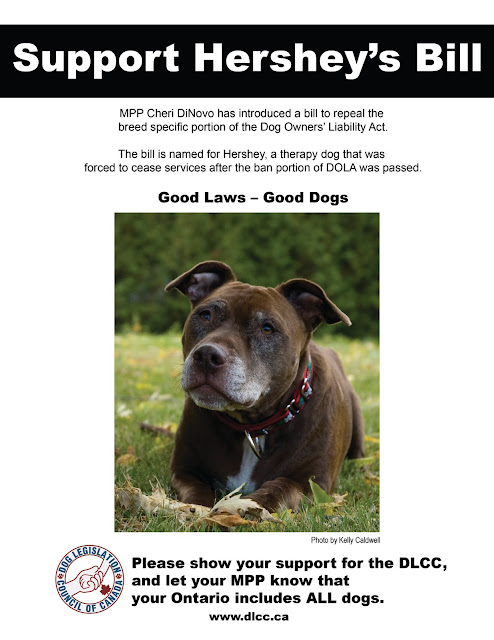 This past weekend we had a booth and ran CGN testing at the Barrie Kennel and Obedience Club Show at Odas Park, Orillia.


A reporter for the Orillia Packet and Times attended the show and dropped by our booth to get the real scoop about what we are about and what we stand for..

"If you're doing these three things, you're a responsible dog owner," said Lori Gray, chair of events with the Dog Legislation Council of Canada (DLCC).

The DLCC, which had a booth at ODAS Park during the Barrie Kennel and Obedience Club's annual dog show on the weekend, is making noise about the breed-specific portion of the Dog Owner's Liability Act, which targets the American Staffordshire terrier, American pit bull terrier and the Staffordshire bull terrier -- the breeds commonly referred to as pit bulls, which have been banned in Ontario since 2005.


Combined, there are less than 1,000 of those dogs in the province, Gray explained.


"To ban a breed where there are only 30 in the province is just ridiculous," she said. "Why aren't we going after the owners?"

The DLCC was trying to garner support for a bill that was introduced in May by Parkdale-High Park MPP Cheri DiNovo. The NDP MPP's bill -- Hershey's Bill -- would repeal the breed-specific portion of the Dog Owner's Liability Act.

DiNovo's bill is named after a dog that had to stop being a therapy dog -- certified as such by St. John Ambulance-- when the ban took effect.

DiNovo isn't the only provincial politician trying to bite back against the ban.

"This is just a PR thing, really," Munro said of the ban. "If there's a problem, it's because they're dangerous, not because of what they look like."

Munro said she filed a freedom-of-information request to find out how much taxpayer money has been spent "going after innocent dog owners." That information was "not available," said Munro, whose six-year-old standard poodle, Trump, competed in the BKOC dog show on the weekend.

The BKOC was glad to be able to help bring the issue to the attention of competitors and spectators.

Opponents of the breed-specific legislation say the province didn't listen to local and international experts when implementing the legislation.

To learn more about the DLCC, visit www.dlcc.ca.

Huge thank you to Nathan Taylor for dropping by the booth and chatting with us. We appreciate your taking the time to get the real story and put it into print..