When I first joined the DLCC, one of my initial tasks was speaking at the committee hearings about Bill 132. I used Mr. Stratton's book as reference many times in my 150 page submission.
In the post 'What is a Texas Red Nose', I posted an article by Richard Stratton which appeared in Bloodlines Journal 1975. I was in contact with our VP of the DLCC, Sandra Alway when writing this article. She knows Richard Stratton and contacted him directly. Both Sandra and Dick sent me thoughtful and heartfelt comments.


Here is an introduction of Richard Stratton, by Sandra Alway.


I first met Dick at an ADBA Convention in 2001, the same year we were sanctioned as a club.  I had him sign a book for me and felt like a little kid going up to my idol.  He's was the sweetest man!!  And I started emailing with him back about then too.  I think it was 2005 when I got him to judge our show and if I remember correctly, he was 75 at that time so he'd be 78 now.  The Pres of the ADBA Kate was really worried about him and she said he was like her Grandpa so to be careful with him!  That old man never stopped surprising me over the weekend!  :-)

He got in the back seat of my truck so his wife Stephanie could sit in the front...she was ailing and a little bit unsteady on her feet.

Dick actually judged the afternoon show, gave a little speech wearing his funny bucket hat and judged 130 dogs before darkness fell.  He was up and down all day, down on one knee, crawling on the ground to get a better look at certain dogs...there was nothing "old" about the man in the ring!  Then we sat around dinner listening to him talk about all the people, the dogs, famous or not, he knew them all until well after 10pm.

And for and I, we got a really special treat.  Dick had a friend who was just a kid back in the 70's named Walt...he mentored under Walter Komosinski who died in 1988.  Komosinski is the bloodline we have.  Dick had asked if it was ok for Walt to come to the show and have dinner with us so we got to sit back and listen to stories about Komosinski and his dogs from both Dick and Walt.  It was a great day even if I didn't place in the show!  :-)  Just getting to have him out was the biggest treat!  And we still stay in touch with Walt.

He's (Dick) actually judging in BC this summer so it's good that he's still getting out and about.  That man will die in a show ring I swear and he'll be the happiest dead man.

Here is the note from Richard Stratton;

Good to hear from you.  I'm hopeful that the article you reprinted will help reinforce your point.  I would just emphasize that even the early breeders were never breeding for color.  They just took them as they came and didn't care what color they were as long as they were game.  But, with all that tight breeding, there was a slide toward the recessive colors--including the red noses.  When you got a dog that was generally acknowledged the best of his generation, such as Centipede, everyone bred their females to him, and their daughters, too, if they got the chance, so most of the true Old Family Red Nose dogs came from him or his brother Cyclone.
Best regards,
Dick

Sandra sent along a picture of one of her Golden Horseshoe American Pit Bull club members Paul, and his two intact males with Dick.  The red dog (Attila) has some OFRN and the black dog is Samson.  This was Attila's very first first place ribbon and boy Paul was thrilled that Dick was the one to give it to him! 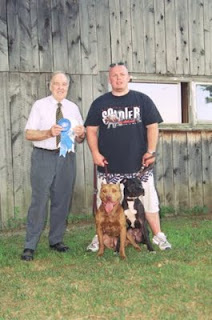 Richard Stratton resides in California. To learn more about Dick or purchase any of his books that are still in print visit his website.