Toronto Sun editorialist took one too many bumps to the head..

An article titled "Without the ban all hell would break loose" in todays Sun, is a sad attempt for a lonely editorialist to stir up shit in a tired subject.


I did a little digging and found what is a possible answer to why Ian Robertson (the author of this pathetic article) would write such bullshit.


During the torch run for the Olympics, Robertson was shoved to the ground by security guards and taken to the hospital and treated for an apparent head injury. I guess there must have been some brain damage involved. His cognitive skills are definitely impaired. 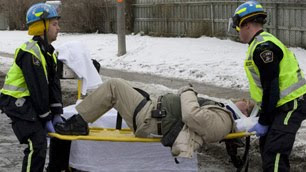 Spouting BS from I guess Merritt Clifton? He never really says which Clifton he is quoting, but if it is Merritt Clifton, he is certainly no expert nor should he be quoted.
For the record numb nuts, the reason "pitbulls" aren't registered with kennel clubs as a breed is because THEY AREN'T A BREED! They are mutts nimrod. Short haired mutts and they weren't descended from anywhere other than crossbred dog breeding of likely Labs and Boxers since they are 2 of the most popular purebreds in Canada.
I am sorry you had such a knock on the head, but could you please check your sources before spewing hatred and lies. You certainly don't know squat about dogs, so maybe stick to a subject you know something about.
at 8:31 PM