Visual breed identification has always been a leak in the foundation of BSL.

Most dogs targeted are mix breed or of unknown lineage.

In Canada the purebreds most commonly targeted are extremely rare. Most recently the province of Quebec has proposed Bill 128 which aims to ban 4 purebred breeds, including the American Staffordshire Terrier, Staffordshire Bull Terrier, Rottweiller and American Pit Bull Terrier. The first three are all CKC registered so the CKC registration numbers demonstrate the rarity of the purebreds.

A dog is either a purebred or they are not. Under the Canadian Animal Pedigree Act it is against the law to sell an animal as a purebred if it isn't registered with an accredited registry under the Act. It is easy to determine if a dog is purebred or not. Those dogs registered purebreds must be microchipped or tattooed. All other dogs fall into the category of mix breed dogs.

This leaves breed ID in the hands of someone who may or may not have any background with dogs or dog breeds. Even those who have extensive knowledge with dog breeds, accredited dog judges, will be the first to tell you that you cannot identify breed mixture in mix breed dogs by visual identification. Until a couple decades ago, playing the party game “guess the mutt” at the pound or shelter was a fun game but the game became a whole lot more serious once legislation began to pop up targeting certain breeds or more accurately dogs that appeared a certain way.
The notion that dogs are dangerous based on breed or appearance is absurd and there is no evidence to support this notion. It is a notion purely based on myth, stereotype, irrational fear and urban legend. It is not unlike witch hunts. When DNA testing for breeds began to gain popularity there was some hope on both sides that pet owners could prove their dog were not a targeted breed and enforcers became hopeful that they could prove a targeted dog was one of the breeds named in dangerous dog laws. That is not how things have worked out. The DNA breed ID tests are not supported by any scientific publications. If you read the disclaimers, you'll see that they cannot ID purebred dogs and do not certify their results. Aside from the fact that these tests are not reliable and in view of the fact that all dogs are virtually identical, with breed being nothing but an expression of physical (inheritable) characteristics such as size, shape, haircoat, colour, etc, there is one point which everyone has overlooked.
The Ontario law bans three purebred dogs. As I said above purebreds are very easy to identify and they are registered to an owner, their birth information, breed, age, number of siblings, ancestors, etc, are all recorded.
People need to understand that aside from three very rare purebreds, this law does not ban dogs because of their ancestry or breed makeup. Even if it were possible to accurately determine which breeds contributed to a mutt's ancestry, it would be completely irrelevant.
It is all about what a dog looks like, not what he or she is. If you have an unregistered Boxer and some AC officer thinks it is a 'pit bull', you are now a target. Same applies with Labs, Boston terriers, any breeds.
Since all dogs are, by definition, 'substantially similar' to all other dogs, much like humans, all dogs are at risk if officials want to put an owner through. Even more chilling is the fact that there is nothing in the law exempting other purebred dogs. If you have one of the many lookalike purebreds, from American Bulldog to Viszla, you are not necessarily safe.
It's all about looks; ancestry is not germane - unless you have one of the very rare purebred dogs specifically named in the law.
One of the red flags exposing junk science is that the news is released directly to media, bypassing the scientific literature.
For these reasons DNA is not reliable or admissible in court. If evidence is going to be used it better be accurate since guess the mutt has morphed from a party game to a game of life or death to any dog that becomes a target under the law.

Here is an example of a known parentage breeding. These two dogs are littermates. Would you describe them as being the same breed mixture? 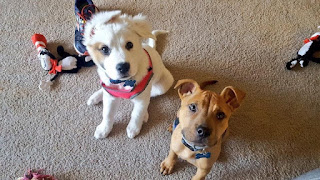 With the above being said, if you are an anti BSL advocate you had better not be using DNA testing as your proof that visual breed ID is inaccurate.

You cannot prove one inaccuracy with another. Statements are either accurate or they are not. You can't be a little accurate or use information that's inaccurate when it suits you or it's convenient. This applies to both sides of the coin.

Point being;
If you are going to create a law that kills a dog based on his/her appearance you had better have some concrete evidence that proves that the dog is dangerous based on appearance or breed only and that you can prove said dog is what you claim they are. Period. This has not been achieved by government on any point since there is no evidence to support any dog is dangerous based on breed or appearance and furthermore it is impossible to prove breed mixture of mix breed dogs.

The foundation of why BSL is so very very wrong on all levels is;

It discriminates not based on evidence but based on myth, irrational fear, inaccurate statements and downright lies.

It targets dog owners based on the appearance or breed of their dog not behaviour.

It targets innocent dog owners and their dogs in a demographic in Canada where the actual purebreds are extremely rare yet the target pool is very large. This leaves any dog owner a target and left to prove the lineage of the dog. With only roughly 10% overall of the dog population registered purebreds and the demographic of the rare named purebreds in legislation much less and in some cases zero population (as you can see from the graphs above), the ability to prove is impossible.

There is a breed named American Pit Bull Terrier but they must be registered with UKC or ADBA to be a purebred. You cannot prove lineage of a random short haired mix breed dog that. As is clearly laid out, simply saying in one's opinion the dog "looks like" is meaningless. Prove it!

Traditionally the word "pit bull" was a shortened slang term for the APBT breed. It has now become a catch all phrase for any dog anyone feels in their opinion is one.

This is such an abstract and nonsensical notion. Why do we label dogs at all? Dogs are dogs.. the notion that we are going to be able to predict behaviour, health etc based on the breed makeup of a mix breed dog is irrational. Anyone who makes this claim clearly has no grasp on genetics.

Placing labels on dogs, especially ones that have become negative is pointless, irrational and downright dangerous to the dog. Time to grow up and put some thought into approach. Shelters and rescue need to drop labels to allow dogs ability to not be prejudged based on inaccurate information.

Governments must stop legislating against dog owners that own dogs of specific appearances. It is ineffective, ruins lives, kills great dogs, is downright reckless and incompetent on the government's behalf. Creating legislation such as this should be grounds for immediate dissolve of any government for knowingly placing law abiding citizens in harms way based on knee jerk, irrational, lazy and incompetent lawmaking.