I am disgusted by the witch hunt happening in Brampton. I knew it was bad, but now we find out from a FOI inquiry there have been 55 dogs seized by Brampton Animal Control since 2005.


There is an informative and interesting article in the Brampton Guardian today entitled "Dog seizures not an isolated case".


According to statistics obtained by The Guardian through a Freedom of Information request, the city has been seizing and labelling many more dogs as “pitbulls” recently.The city’s seizures of “illegal pitbulls” skyrocketed in 2009, a trend that appears to be carrying on this year with five seizures— including Brittany and Rambo— in January alone.The dogs are seized for a variety of reasons, including requests from police (the owners are jailed and cannot care for them), strays, complaints, bylaw infactions, or they are turned over by owners who no longer want them, according to city officials.The information reveals the city’s ACOs have identified and seized 55 pitbulls in a variety of situations since the provincial pitbull ban and a corresponding city bylaw came into effect in late 2005, Of those dogs, 34 were labelled “illegal” by the city and either euthanized (19) or shipped out of province (15) at the owners’ expense, when an owner was involved.The statistics show over those five years, more than half of those dogs— 56 per cent— were seized in 2009. That’s a 138 per cent increase compared to the eight seizures of “illegal” pitbulls in 2008.Only two of the dogs deemed to be illegal were American Staffordshire terriers. All the rest were mixed breeds, which are covered under both the provincial Dog Owners Liability Act (DOLA) and the city’s own dog bylaw. Both define a pitbull as a pitbull terrier, Staffordshire bull terrier, American Staffordshire bull terrier, American pitbull terrier, or “a dog that has an appearance and physical characteristics that are substantially similar to those dogs.”

I am not going to go on about how there is no such thing as a 'pitbull' and breeds of cross bred dogs CANNOT be identified, because my face is rather blue. However I am going to bring up a point that I don't think the city of Brampton would know a purebred if it bit them in the A$$!


Only two of the dogs deemed to be illegal were American Staffordshire terriers.

There are less than 30 purebred American Staffordshire Terriers in the whole province.


There have been zero American Staffordshire Terriers seized in this province since 2005! So basically Brampton has no idea how to identify purebred dogs either. Now that is pathetic.


The CKC 2006 registration numbers by most popular breed are:

These are numbers for Canada .


Peel Health statistics show there has been no corresponding drop in reported dog bites in Brampton since the ban was put in place. The number of dog bites reported has remained steady over the last seven years, according to Paul Callanan, the region’s director of environmental health.

So how well is the witch hunt working for you? So if there is no decrease in bites (I guess not since you are ripping good dogs with no complaints against them out of loving homes) so why is it exactly you are seizing and killing innocent dogs?


When asked about the spike in seizures in 2009, Jamie Lowery, the city’s commissioner of community services, said the city was acting only on complaints when dogs were seized, although he did not specify how many were public complaints and how many— like the seizure of Brittany and Rambo— were generated through witch hunting ACO patrols and licencing renewals.

He said increases and decreases in seizures are “unpredictable” as a result.

“It’s like snow,” Lowery said. “It snows heavy one season, and not so much the next season.”

It's like snow??? WTF? Lowery is comparing ripping family members out of loving homes and killing innocent animals to weather patterns? Breaking down the door of taxpaying citizens and forcibly taking their dog would be better compared to hunting with torches and pitchforks.


The city’s bylaw is worded the same as the provincial act, but Lowery specifically blamed the act for being vague.“It’s not the city, it’s the legislation,” he said. “That is clearly the biggest problem we have. That (DOLA) is very vague and ambiguous. It speaks to certain breeds, but it also brings into question about characteristics, so we are charged with (trying) to enforce or interpret the legislation. It’s vague at best and the worst part is there really is no relief valve in the legislation for an appeal. It doesn’t say whether it’s one per cent pitbull or 100 percent pitbull. That’s it.”However, he said the city is doing a good job of enforcement.

Municipal bylaws have the power to write bylaws as they see fit. I'll most certainly agree, the amendment to DOLA is vague, however if you can read at all, the law uses the word "may" not "shall" or "must".

The ban was added to DOLA as an optional enforcement using the word “may” A proceeding may be commenced is the exact wording.
In an excerpt from Hansard during a debate at Queen’s Park:
MPP Peter Kormos made a statement regarding municipal participation during one of the many House debates over the legislation.  This is an excerpt from Hansard:
"That provoked me to put questions to ministry staff about exactly what the Bill does: "Does the bill require municipalities to participate in this ill-conceived so-called pit bull ban?" "No; it merely enables them." Oh, I get it: These are the tools in the toolbox"
Here is a math quiz for you now.


There is no such thing as 'pitbull' for pitty sake! It is a slang term for a short type of dog. This could include any old mix but most likely NOT originating from any of the named purebreds since they are all so incredibly rare! All three breeds combined there are less than 1000 in the province!


It doesn't matter what the breed makeup is. If a dog is dangerous, deal with the owner. If it isn't, leave them the hell alone! Nuff said. Ottawa has come out and publicly stated they will NOT actively enforce the ban. As far as I know they are still in Ontario? Why can't Brampton do the same?


The article tells the story of Gail Crocker and how her son's dog Rocsi was as she put it;  “They forcibly took them right off my front porch. Right out of my arms.”


Brampton needs a smack down.


Municipal elections are this fall. Get out to vote people. These people are voted in by you. They can just as easily find themselves at the back of the unemployment line. Send a message that we aren't going to take this anymore.


We the dog owners of Ontario want our rights back. We've had enough. 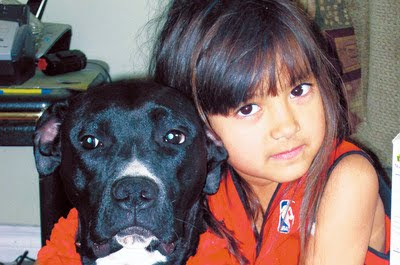 GONE TO NEWFOUNDLAND. Missus, shown here with five-year-old Kayden, was one of 19 Brampton dogs labelled "illegal pitbulls" by the city last year. Her owners insist she was a boxer/American bulldog mix just like Brittany and Rambo, but they were forced to give her up and ship her out of province.
at 11:48 PM