I ran across an interesting article on the dangerous tactics of McGuinty, with respect to Ontario's energy plan.

Ontario needs to return to rational decision-making when it comes to ensuring that current strategies meet future power generation needs. Current policies, such as the promotion of wind power, reflect public concerns about global warming at the expense of securing a stable and economic energy future. If such publicly popular but economically unsound policies continue, the province’s prosperity will be seriously jeopardized.

Now this goes directly against what Dr. David Suzuki is saying. In fact Dr. David Suzuki has been publicly endorsing McGuinty's energy plan, which the Lieberal'shave been making sure YOU know. I guess they don't have too many endorsements so the one they have they are latching on to like a 'dog with a bone'. 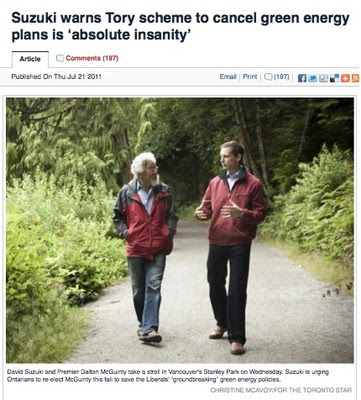 In an exclusive interview with The Star, Suzuki warned it is “absolute insanity” for Tim Hudak to want to scrap wind and solar power initiatives that the Tories claim are too expensive.
“I don’t get it, because it’s a job creator — I would have thought that the Conservatives would be banging away at the need to create jobs,” the host of CBC’s The Nature of Things said during a stroll withMcGuinty in Stanley Park on Wednesday.

In the tone of typical bias you would expect The Star to use when talking about Liberal polices, the paper goes out of its way to only tell the side Suzuki, McGuintyand The Star want you to hear – solar energy is good. Always. No matter the cost.
What they don’t tell you is that Hudak is promising to dump the idea of paying 80 cents a kilowatt hour, that’s 8 to 13 times what the going rate is.
Now maybe if you are Dalton McGuinty or David Suzuki you can afford to pay 8 to 13 times the going rate just to feel good about yourself. I mean after all McGuintyhas a good job that pays well and has his house paid for by the public purse. Suzuki has become wealthy enough over the years.
Maybe for them, paying a lot more for energy is no big deal. For the rest of us it’s a big deal!
McGuinty claims that the green plan has vaulted Ontario to the forefront of action against climate change.
At the time of the Suzuki/McGuinty stroll in Stanley Park, McGuinty was attending a first minister's meeting in Vancouver of which he was "thrown out"... Guess he's not so popular with the other premier's either..
In case you missed it, despite having the second-highest average wages in Canada, Ontario is now officially a have-not province. This year – its third on the dole – it will get $2.2 billion, more than any other province except Quebec, which pockets more than half of the $14.7 billion handed out in equalization payments from the Federal Government.  The program designed to allow each province to offer roughly the same services, regardless of relative wealth.
Three years ago, before Ontario moved into the receiving end of equalization,McGuinty argued that the equalization program should be scrapped.
He still doesn’t like the term, but he has come to like the way equalization works, threatening to “flex our elbows and assert ourselves” if anyone tries to mess with Ontario’s entitlement.
Going into the first ministers’ meeting this week, McGuinty took the same narrow view of the energy policy, arguing that Ontario taxpayers have been subsidizing the oil industry for years so it’s only fair that the rest of Canada, through the taxes we send to Ottawa, should now be subsidizing the green energy business in Ontario.
That claim is so astounding it deserves to be broken down.
First, it’s true that the oil and gas industry is subsidized through various tax and royalty incentives. McGuinty’s complaint is based on the notion that if the petroleum industry paid higher taxes, Ontario residents could pay less. The point of the subsidies, however, is to encourage investments that wouldn’t otherwise be made. In spite of the subsidies, the oil and gas business generates billions of dollars in revenues that reduce the amount of taxes that all Canadians, including those who live in Ontario, have to pay.
McGuinty should be familiar with that principle, since his province has paid billions in subsidies to the auto industry over the past few decades to maintain that business with the jobs and the tax revenue it generates for Queen’s Park.
Ontario’s green plan is set up on the same principle. The government is offering lavish subsidies in the form of a premium price for the electricity they generate from renewable sources to companies that are willing to invest in the province.
The Liberals say the strategy is working, creating thousands of jobs and allowing Ontario to move toward shutting down the coal plants that still produce a significant portion of electricity consumed in the province. The opposition says it’s an expensive failure that is burdening consumers now without ensuring sufficient generating capacity for the future.
The largest source of electricity is still nuclear energy, an industry that a study from nine years ago estimated had already been given the equivalent of $17 billion in subsidies from the federal government.
On a per-capita basis, Ontario is already getting more in total transfers from Ottawa than the provinces with an oil and gas industry, 12 per cent more than British Columbia and Saskatchewan, and 45 per cent more than Alberta.
So is it possible that the "Green Energy Plan" in Ontario is a proverbial money pit that is not producing its worth? That the sustainability is just not there butMcGuinty is giving it mouth to mouth in hopes it will somehow magically revive. All facts point to failures based on too expensive to maintain in relation to energy production. So called "green jobs" are drying up. This past week the plant inNewmarket producing solar panels ceased production yet McGuinty threatened the workers that if they voted for Hudak the plant would close.
Is it possible that McGuinty is lying to David Suzuki? Now there is a possibilityconsidering his track record..
Is it possible that David Suzuki has received some coin from the Liberal government for the David Suzuki foundation? hmmm there are a lot of organizations on the dole could the Suzuki Foundation be one of them?
All questions that deserve an honest answer however you may have to use your best judgement to decide.
On October 6th vote for the candidate most likely to beat the Liberal. McGuinty is incompetent but don't take my word for it!
at 3:29 PM